I recently started using Atom, this awesome web-based editor from GitHub. My previous editor was Sublime Text but I decided to make the move. Why? Because Sublime has a slow development.

However, this is about my Atom setup, not a rant about why Atom is better than Sublime.

I prefer a dark theme so I chose One Dark UI theme and One Dark syntax theme. It’s just awesome. 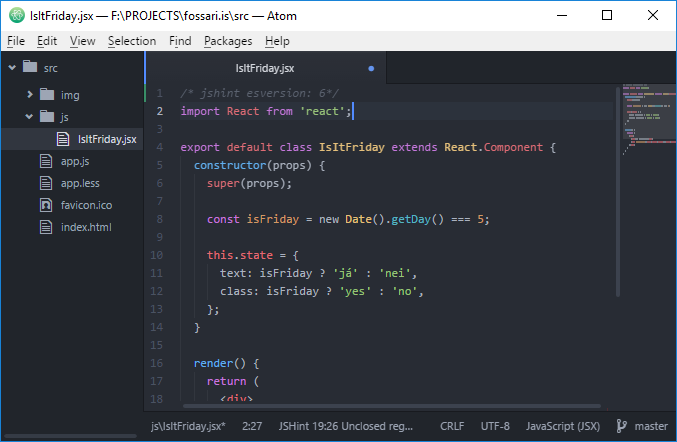 I have only two custom keyboard bindings.

CTRL+SHIFT+L is for the multi-line selection feature. This is the same binding as in Sublime.

CTRL+SHIFT+R is for auto indentation.

My stylesheet is very simple. I only have this custom indentation styling for the indent-guide-improved package. You can see the output on the above screenshot.

docblockr – For easy documentation in my code. Mostly use it for JSDoc in JavaScript.

emmet – For easy typing bunch of HTML with CSS-like abbreviations.

indent-guide-improved – For the awesome customizable indentation guides in my code. See in the screenshot above.

jshint – For hinting my JavaScript code.

todo-show – Really useful if you have some TODO comments in your code.

I also use most of the core packages. This is why Atom is so awesome, even at its core it’s packed with features.